Strong individuals make up an even stronger team

Currently we are supported by over 60 well-qualified individuals who are experts in their respective fields. Chance for Children (CFC) guarantees fair working conditions, adequate social benefits and proper wages for all of our employees. In addition, CFC is actively supported by international and local volunteers and donors. 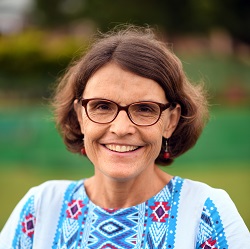 Daniela is from Gommiswald, Switzerland and studied to become a teacher. In 1997 she travelled to Accra for an internship and worked for the International Committee of the Red Cross in the northern Ghana. After returning to Switzerland she continued to work as a teacher and began to study theology. Her experiences in Ghana, however, drew her back to the country and together with Amon Kotey they established Chance for Children in October 1999. Today she lives in Accra with her husband and two children.

Amon was born in Accra and was raised by family members, as his single mother could not provide for a family of seven. After graduating from Junior Secondary School, he lived with his grandmother and contributed to the family’s income by selling mussels to tourists. Subsequently, he learned how to build drums at Accra’s Cultural Centre, produced them and shared the profits with others. He met Daniela in 1997 and, given he had become familiar with the situation of street-connected children first-hand, they decided to work together to turn their ideas into reality.

Awuley was born in Accra into a family of seven and shared a single room with all of them. His association with Chance for Children started through a friendship with Amon, his neighbor at the time. When Amon started making drums to support street-connected children, Awuley joined him as a volunteer drum maker. Later on, he left for University from where he graduated with a degree in Economics and Geography. In 2006 Amon and Daniela invited him to share in their vision of empowering street-connected children which he wholeheartedly accepted, and since 2013 he has served as one of the Directors.

You Can Give Street-Connected Children A Chance Now!